Eric Gale, Pastor 317.773.2383 Ext. 2 eric.gale@fpc-noblesville.org
Since April 1993, First Presbyterian Church of Noblesville has been proud to call Eric Gale our pastor. Eric grew up on the south side of Indianapolis and gave his life to Christ through the upbringing of his family and the ministry of Southport Presbyterian Church. He and his wife, Karen, are both graduates of Southport High School. Eric earned his bachelor’s degree from Ball State University in Business in 1981 and a Master of Divinity degree through Trinity Evangelical Divinity School and Louisville Presbyterian Seminary in 1986. Before coming to Noblesville, Eric was an Associate Pastor for Youth on Indianapolis’ east side. Eric and Karen love the Noblesville area and have found it a wonderful city to raise a family. Their son, Aaron, is a graduate of Taylor University. He is married to his wife, Allison and they have one child, Lucy. The Gales’ daughter, Elizabeth, is a speech pathologist with Noblesville Schools. sKaren, after graduating from the University of Evansville, taught first grade and kindergarten for 36 years before retiring in 2017. The Gales enjoy trips to Florida, walking and reading on the beach.  Eric says he enjoys exercising, working out in the yard and walking the family dog, but his true love — other than Karen — is golf. In 2017 Pastor Eric and his family received a Clergy Renewal Grant from Lilly Endowment, which he and his family used to travel to California, Hawaii, and Israel. One of his favorite verses of scripture is from Nehemiah 8:10b: “… This day is sacred to our Lord.  Do not grieve, for the joy of the LORD is your strength." 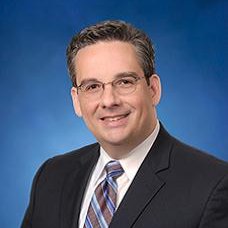 Dr. Michael Davis, Director of Music
mrdavisisc@aol.com
Michael came to FPC in 2004 and is a cornerstone of our robust Music Ministry. One reason he continues to serve FPC is the people. He calls the congregation “vital, friendly and filled with talented, caring people.” (Visit Meet Our Music Director to read more about Michael’s career and the Music Ministry.) In addition, he has been Assistant Artistic Director for the Indianapolis Symphonic Choir since 2002. Other musical endeavors include playing piano with Smooth Country in Nashville, IN; and guitar at the Hedgehog Music Showcase in Arcadia, primarily with his swing quintet The Pithy Oddfellows. . Cheryl Mayhew, Organist clmayhew@yahoo.com
The first service Cheryl played the organ at First Presbyterian Church was Aug. 23, 2009. Prior to that, she was the organist at the church in which she grew up, Christian Park Reformed Church, for 24 years. At FPC, she enjoys working with the Chancel Choir and Children's Choir.  Music touches people in so many ways, she says, and she has been blessed to be able to participate in so many worship services over the years. Cheryl and her husband, Rick, have three young-adult daughters — Shelby, Amanda and Kendall. 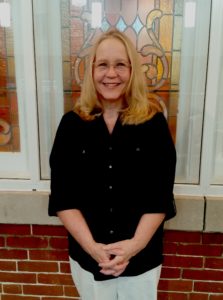 Trish Moore, Youth Director Grades Pre-K - 5
bobtrishmoore@sbcglobal.net
Trish and her husband Bob joined FPC in 2014.  They have two young adult children, Shadin and Isaac.  Trish graduated with a degree in Elementary Education and currently teaches preschool at First Christian Church in Noblesville.  She has served as Sunday School teacher, Christian Education elder and volunteers with the Summer Lunch program.'

Marlee Light, Youth Director Grades 6-12
connernmarlee@icloud.com
Marlee is one of the middle/high school youth leaders at FPC.   She was baptized as an infant at First Presbyterian Church and became a member as a teen.  She graduated from Ball State University in 2013 and later earned her teaching certificate from Indiana Wesleyan University.  She is a middle school art teacher at Tipton Middle School.  She and her husband Jake married in 2015 and live in an historic home in downtown Noblesville. She loves art, shopping, and spending time with her family and animals. 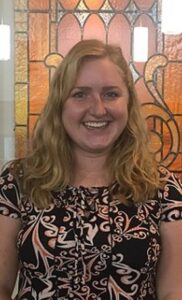 Kendall Teague, Youth Director Grades 6-12 mayhewk96@gmail.com Kendall has been a member of First Presbyterian Church since she was a youth. She is married to Quinn.  Kendall graduated from Purdue University and is a third grade teacher at Hazel Dell Elementary School in Noblesville. Robin Story, Business Manager 317.508.4411 robin.story@fpc-noblesville.org
Robin joined FPC in October 1999. Since that time, she has been a Deacon, involved in Presbyterian Women and a member of several committees. In September 2006, she became the Business Manager for the Church. Robin handles the business finance of the church, assists with the budget planning and related projects. Outside of the church, she works for attorneys in Westfield and Noblesville. She has five children and five grand children and is married to Jason Story, who is also a member of FPC. 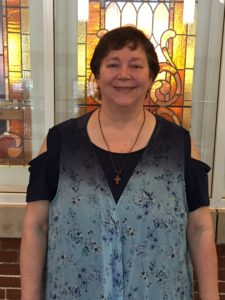 Janie Emerson, Administrative Assistant 317.773.2383 secretary@fpc-noblesville.org
Janie joined FPC in February of 2005. Since that time, she has been a Deacon, an Elder, been involved in Presbyterian Women and a member of several committees. In April of 2018 she became the Secretary for the Church. Janie updates attendance, prepares the bulletins, manages correspondence with visitors and range of other responsibilities. She has two adult sons, Robert and Michael, as well as a white German Shepherd (Abe) and two mischievous cats (Shasta & Waldo). Janie grew up in Utah, where her mother, sister and Michael reside. She spends much of her free time doing needle work (mainly cross-stitch), and travels around the country for classes. She has hung one of her favorite pieces (The Little White Church) in the church office! 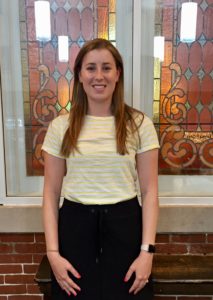 Marlee Light, Nursery connernmarlee@icloud.com Marlee is the second Nursery Care Provider at FPC.  She was baptized as an infant at First Presbyterian Church and became a member as a teen.  She graduated from Ball State University in 2013 and later earned her teaching certificate from Indiana Wesleyan University.  She is a middle school art teacher at Tipton Middle School.  She and her husband Jake married in 2015 and live in an historic home in downtown Noblesville. She loves art, shopping, and spending time with her family and animals. Michael Ross, Custodian ross1380@att.net Helping to keep our beautiful historic church in tip-top shape, Michael started in his position as Custodian at FPC in July of 2003. Several of his family members have been members of the church, and his mother, Janice, was a member of the Presbyterian Women ministry until her death in 2012.