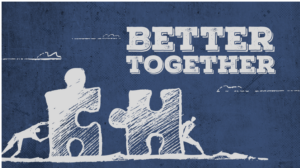 Congregational leaders are currently wrestling with a question that no one alive has ever had to face:

When the pandemic is finally behind us, will church attenders come back to church?

There are good reasons for believing that the New Normal will not look exactly like the Old Normal.

Long before America was driven indoors by social distancing, mask-wearing, and Zoom meetings, there were signs that “doing life together” was under siege.  The NFL and other professional sports leagues have reported a steady decline in attendance at games.  Why purchase a seat, pay an exorbitant price for a hot dog, battle traffic and inclement weather, and then risk sitting next to a belligerent stranger, when for a few dollars you can purchase a TV package that allows you to prop up your feet in your own family room and watch the game in high definition?

Likewise, church folks have discovered the convenience of being flat-screen worship spectators – sitting in a recliner in one’s pajamas holding a cup of coffee every Sunday morning.

For many of us, the isolation feels normal.  Even comforting.

According to the Gallup Organization, Americans are among the loneliest people on earth.  Even before the arrival of COVID, a startlingly high percentage of our time was spent indoors, staring at screens, with our blinds closed and our privacy ensured.  Our homes have become places of virtual solitary confinement.  If an alien culture were to watch nothing but our TV ads they might conclude that the main activity of Americans is to drive off-road vehicles to places of stark isolation so we don’t have to endure the presence of the people who live next door.

It’s no surprise that the pandemic has strained existing relationships.

Author and pastor John Ortberg writes, “Of course, we all say that relationships are more important than money.  But we constantly cheat relationships for the sake of work or money.  There are no TV shows called Who Wants to be a Great Friend?  What we have come to call ‘reality’ shows are programs that deliberately pit one person against another.  ‘Reality’ means having someone excluded or fired or voted off the show.”

Even though many churches have been celebrating “an Easter-sized attendance every week” during the past 16 months (as measured by those who log in online), preliminary reports suggest that people are not in a rush to return to actual sanctuaries.  The church-attending habit has been interrupted.  And it may not be an easy habit to restore.

Does it really matter whether or not followers of Jesus rub shoulders with each other?

One answer to that question springs from the New Testament’s only historical account of the early church, the book of Acts.  Luke, its author (who is likewise assumed to have penned the Gospel that bears his name), provides what appears to be not just a description of the social interactions of the early Jerusalem Christians but a prescription for ensuing generations of people who are serious about following Jesus.  Here’s what he writes in Acts 2:42-47:

“They devoted themselves to the apostles’ teaching and to the fellowship, to the breaking of bread and to prayer.  Everyone was filled with awe, and many wonders and miraculous signs were done by the apostles.  All the believers were together and had everything in common.  Selling their possessions and goods, they gave to anyone as he had need.  Every day they continued to meet together in the temple courts.  They broke bread in their homes and ate together with glad and sincere hearts, praising God and enjoying the favor of all the people.  And the Lord added to their number daily those who were being saved.”

It’s worth noting that that last sentence is still a present reality.  If this is a typical 24-hour period, then by this time tomorrow morning somewhere in the world there will be at least 50,000 new Christians.  Approximately 25,000 of them will live in China.

Notice the frequency of the word together.  Luke writes, “All the believers were together… Every day they continued to meet together in the temple courts.  They broke bread and ate together with glad and sincere hearts.”  The early Church became the primary life group for its members, apparently supplanting other loyalties.  This was far more than a once-a-week, one-hour gathering.

And this is where the book of Acts starts to sound like a fantasy to contemporary Americans.  What’s the toughest demand that Christianity makes?  What is the hardest thing for modern ears to hear?  Is it the idea that embracing Jesus is the only way to know God?  Or that God’s design for sexual intimacy assumes the boundaries of marriage?

We can make a good case that the Bible’s most counter-cultural demand in the 21st century is that Christianity is fundamentally plural.  As Eugene Peterson put it, “We are not ourselves by ourselves.”  Within the body of Christ there are to be no more solo fliers.

The stumbling block for so many of us is that when we have gone looking for true community within the organized church, we’ve been deeply disappointed.  Luke provides this beautiful sketch, yet we rarely see it before our own eyes.  How can these verses go from mere words on a page to a reality that we increasingly experience?

First, let’s be careful not to romanticize this text.  I have heard numerous teachers and preachers say, “All we need to do is get back to the first century” – as if a time machine might take us to a place where none of the followers of Jesus are actually sinners.

The early church was just like today’s church.  It was hardly a picnic on a sunny day.  Shining a bright light always draws bugs, and there were plenty of bugs hovering around the warmth and the light of this new community.

Remember that Jesus said the only people who come to the doctor are those who admit they are genuinely sick.  If you choose to return this summer to real-life church gatherings, you may be sure that you’ll find yourself surrounded by brothers and sisters who have a lot of growing up to do – which is exactly what they’ll be thinking about you.

Second, let’s remember that God is not so much asking us to add to our lives, as to transform the lives we already have.  Your schedule in all likelihood is already overwhelming, and it can be exasperating to hear that if you really love God you’re going to have to excel at the four activities in Luke’s text:  being devoted to the apostles’ teaching, to the fellowship, to the breaking of bread, and to prayer.

A few years back a feature writer asked a number of experts in a variety of fields (a nutritionist, a home decorator, a sleep researcher, a fitness coach, a vocational trainer, a financial planner, a family therapist, and so forth) how much time the average person would need to devote per day to their particular realm of life just to get by – not to excel, but to do the bare minimum.  When all those minutes were added together – to achieve the minimum requirements for successful life management – the total was 36 hours per day.  No wonder we feel exhausted when another expert tells us to keep pedaling the bicycle faster or we’ll fall behind everybody else.

Third, think small.  There are 59 specific commands in the New Testament that include the words “one another” or “each other.”  They reflect the heart of what it means to live as a society of Christ-followers.  The only way we can experience most of them – like accept each other, admonish one another, and bear each other’s burdens – is to spend time together in long-term, trusting relationships a few people at a time.  We’re not likely to experience the depth and reality of the “one another” commands merely by staring at dozens of Zoom tiles where people are still trying to figure out how to use their mute buttons.

Luke includes this important dynamic:  “They broke bread in their homes and ate together with glad and sincere hearts.”  What is the secret of growing close to other people?  Eat a lot together a lot.  One of the most potent salves for hurt feelings and misunderstandings is great barbecue.

Fourth, and finally, take some risks.  It won’t be easy to invent the post-pandemic world.  One of the hardest things to lavish on another human being is the gift of time.  But choosing to give to someone our hours and our days makes them feel noticed, important, and valued.

And such a gift, regularly bestowed, is what gives us a real shot at experiencing real community.

When all is said and done, you may still be clinging to your solo flier’s license – your “right” to go through life alone, without all the messiness of hanging around other people.

But in the end, one of life’s greatest wonders turns out to be the wonder of doing life together.

Would you like to explore previous reflections, and learn more about this ministry?  Check out glennsreflections.com.

Glenn McDonald is an ordained Presbyterian minister, has 42 years of congregational and workplace leadership experience, and is the author of ten books on discipleship and spiritual formation. He and Mary Sue have four children, seven grandchildren, and enjoy living on a small farm not far from Indianapolis.