God’s Grace at Christmas for a Brokenhearted Man

Christmas is normally one of the happiest times of the year.  Perhaps that is why I will always remember the Christmas my heart was breaking.  I had finished my course of study in preparation for the ministry at Louisville Seminary, and received a scholarship for one year’s additional study, at Yale Divinity School.  I was married a couple of weeks before heading off for Yale, but once there, received the shocking news that the woman I married was “mistaken” in her love and wanted out of the marriage.  A brief period of counseling failed to alter her resolve, and I was facing divorce, and the question of whether I needed to change my career path:  what church out there would want to take a chance on a divorced pastor?  My confidence in myself was badly shaken:  how could I choose to marry someone who so quickly could opt out of marriage?  It was only later that I learned the woman I had committed to became the partner of a woman professor. 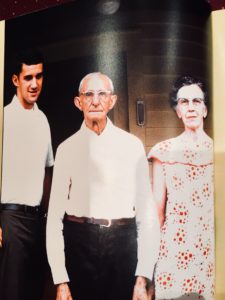 Christmas break was coming, and I decided to accept a long time friend’s invitation to visit him in Indiana, and following that, to take the bus down to Bloomington, Indiana, to see my Grandpa Layman.   90 year old Grandpa was alone, 2 years after Grandma’s death.  I didn’t relish the thought of driving alone all the way from Connecticut to Indiana, and thus the bus.  After a good visit with my friend, I took the bus to Bloomington.  Grandpa never owned a car, but the bus station was under a  mile from Grandpa’s humble home on West 13th Street.  I arrived after dark, and Grandpa was already in bed (he went to bed around 6:30!)  As a child, I called this Grandpa “My play Grandpa”, because he was a fun loving man who would play cowboys and Indians with me, and had a ready laugh and teasing sense of humor.  Grandpa quickly arose from bed and made me feel loved and welcomed.  He quickly said “I was really disappointed in her”  and his gracious, accepting love did me a world of good.   Over the next days, we each lifted the other’s spirits.  Grandpa said to me:  “I want you to pick out one of my scarves for your Christmas present”.  It was a present I’ll always treasure!

That was the last time I was ever with Grandpa.  He died in his sleep a few months later.  That visit marked a turning point for me.  I decided if there was a church somewhere that would take a chance on a young, divorced pastor, I would give it all I had.   I can now look back on over 40 years of ministry, made possible by the grace of a merciful God, the people willing to give me a chance, and family members who encouraged and loved me.

Songs proclaim Christmas to be “the most wonderful time of the year”.  But keep in mind that there are people out there whose hearts are breaking, hungering for peace on earth and good will toward men….just what Christ came to bring! 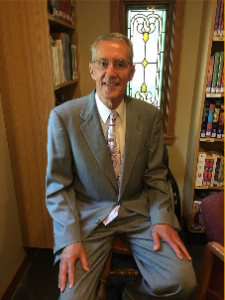 David received a Bachelor of Arts from Carroll College (Wis.), and spent his junior year studying in the Philippines under a program sponsored by the Presbyterian church.  He also received a Masters of Divinity from Louisville Presbyterian Theological Seminary, spending an optional intern year in Guatemala and received a Masters of Sacred Theology from Yale Divinity School.  David served 39 plus years as a pastor, the great majority  in Richmond, and also 8 years in Greenville, Ohio when Paul and Candi Wood were there!   He met and married his wife Pam in Richmond.  She graduated from Reid Hospital’s school of radiologic technology, and worked over 20 years as an X ray tech.  There are 8 reasons they wanted to retire in the greater Indianapolis area:  their daughters, spouses, and 4 grandchildren .  Daughter Andrea Griswold majored in Early Childhood education at IU, and currently coordinates the Hamilton Heights public preschool.  Her husband Josh works for Chubb Insurance.  Younger daughter Rachel graduated from Ball State in interior design, works for Office Works, and lives in the Lawrence area with husband Brian Jackson and infant son Dean.  Brian works for Klingbell Capital Management.